Jack was traveling in a POV, the driver lost control and struck a tree on the passenger side of the vehicle killing Jack instantly. 15 ASOS held a memorial service on 5 November 2002, His funeral was held on 9 November 2002 in Tuscon Arizona. Donations should be sent to the Air Force Aid Society in his memory. Jack had only been in the careerfield for 2 months. He will be missed, now, and in the future.
From the Local Newspaper "Age 21, of Tucson, AZ died November 3, 2002. He was an Airman First Class Tactical Air Control Party with the United States Air Force, 15th Air Support Operations Squadron Fort Stewart/Hunter Army Airfield. Son of Jan O'Brien and the late Mike O'Brien of Tucson; brother of Patrick O'Brien of Tempe. Jack graduated from Sabino High in 2000. He attended the University of Arizona then enlisted in the US Air Force where he was with the TACP Special Forces located at Fort Stewart, GA. He really found himself in the Air Force and absoulutely loved it. In lieu of flowers the family asks that donations be made payable to the Air Force Assistance Fund, 355 MSS/DPMS, 5260 E. Granite Street, STE 15 Davis-Monthan AFB, AZ 85707-3009. Jack was loved by all who knew him and will be missed by all. Visitation will be on Friday, November 8, from 10:00 a.m. to 11:00 a.m. services will be at EAST LAWN PALMS MORTUARY, November 8th at 11:00 a.m." 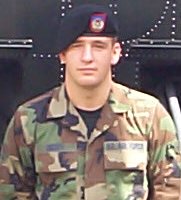