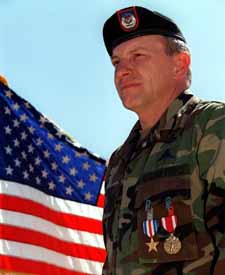 Stamey was honored for heroic acts while working with Special Forces in Afghanistan.

''I consider it an honor,'' the 39-year-old Clarkesville, Ga., native said after the ceremony. ''In my opinion, I don't think I deserve it. I was just doing what I was taught to do.''

Tactical air control party members, who wear the black beret and have Army patches sewn on their Air Force uniforms, work on the ground with Army units and provide communication and coordination with aircraft that are bombing nearby targets.

Snipers and machine gunners were shooting from three sides at Stamey and his team on Nov. 23. He contacted a B-52 bomber, declared an emergency, briefed the pilot and then helped his team shoot back.

''With his team running low on ammunition, he passed his remaining ammunition out to the team members,'' his award citation said. ''Without regard for his personal safety, Sgt. Stamey crawled to their ammunition storage point, returned to resupply the team and then resumed accurate sniper fire while awaiting additional close air support.''

Stamey said he probably crawled about 50 yards. His thoughts were to ''hurry up and get back so I can stick some sniper ammo back in sniper rifles to take those guys out or at least get them to keep their heads down.'' He also was praying for the aircraft to hurry and get there.

Honor graduate
Stamey, a master military freefall parachutist, was the honor graduate at the Special Operations Target Interdiction Course as the top shooter and set a record that still stands, the ceremony program said.

''He was in the first contingent to go over,'' Longoria said. The airmen's mission was to work with the Special Forces teams.

Special Forces ''A'' teams infiltrated into Afghanistan to establish contact with the various anti-Taliban forces and worked with the future leaders of Afghanistan.

''He went with them when they infiltrated into the country with Special Forces teams,'' Longoria said.

The award citation commends Stamey for gallantry during military operations from Nov. 8 to Jan. 5.

Link to Audio
Master Sgt. Stamey talks about the mission
Stamey ended an Air Force career that began in 1981, one week after his 17th birthday.

He graduated from high school early, and his parents had to grant permission for him to join the Air Force. He began in electronics maintenance but quickly opted for a more high-adventure job.

''It's good to turn the page and move on to a new stage in my life and be able to spend more time with my family,'' Stamey said. ''I am going to miss the camaraderie and working with the type of high-caliber individuals that I've grown accustomed to working with.''

He also received the Meritorious Service Medal for his achievements outside combat.

''I hate, begrudgingly, to let him go,'' Longoria said. ''On this occasion of his retirement, we are very proud of him. If we could keep him for another 10 years, we would.''

Military editor Henry Cuningham can be reached at cuninghamh@fayettevillenc.com or 486-3585.