Our U.S. Army Rangers still aren't allowed to talk publicly about Operation
Anaconda, fought last March in Afghanistan, probably because the Op proved
in spades how out of touch the top brass are with counter-guerrilla tactics.
I suspect the Secrecy Act is being employed once again to protect bad
generals - at the cost of telling our countrymen the truth about an
extraordinary mission conducted by the men of the 1st Platoon of Alpha
Company, 1/75th Rangers.

Eyewitness reports I've stitched together from allied commandos testify to
that platoon's daring and heroism while rescuing teammates and aircrew from
a downed chopper as they were about to be snuffed out by a ferocious enemy.

Earlier, the platoon had been spread across the battlefield on separate
missions. When word came down to find MIA Navy SEAL Neil Roberts, the lead
element air-assaulted, its chopper was shot to smithereens upon landing, and
the Rangers and aircrew were stuck on a rocky ridge surrounded by a large,
well-dug-in al-Qaeda force.

Because of blistering enemy incoming fire, a 1st Platoon reinforcing element
landed by chopper at the base of the mountain, about a mile from the
besieged warriors. The 10 men began clawing their way toward the top -
loaded down with 100 pounds of kit - on what would prove to be a 5,000-foot,
almost-vertical three-hour climb. And throughout this near
mission-impossible feat, they were battered by enemy rifle and mortar fire
that wounded several of these elite warriors.

When the Rangers got to the top, they busted through the enemy's bunker line
and linked up with their surrounded mates. But they soon found themselves
waist-high in snow, the thermometer hovering around zero, in an increasingly
hotter frying pan - with incoming RPG grenades, recoilless rifle fire,
mortars thumping in and bullets snapping like angry bees across the open
plain at 12,000 feet.

An SAS commando who watched the fight said, "These blokes, along with their
tactical aircraft and chopper air support, killed a bloody lot of them."

Apart from their own incredible guts, the air support - virtually on top of
them - is what kept them alive. If USAF air controller Staff Sgt. Kevin
Vance wasn't on the ground bravely directing the fire, it would have been
taps for all these good men. (Editor's Note: See "For the Record: Account of
Gardez Battle, March 4, 2002" in this edition of DefenseWatch.)

Ranger Marc Anderson said, "This is where all the training pays off," before
catching one with his name on it while bounding toward the enemy. Ranger
Bradley Crose was hit in the head by a round that smashed under his helmet
and out the back of his head, and Ranger Matthew Commons went down for the
count as well. Air Force warrior Jason Cunningham was hit by two rounds in
the gut and lay out in the bitter cold - slowly bleeding to death.

When the Ranger rifles were shot up, had malfunctioned or the men ran out of
ammo, the Rangers policed up al-Qaeda weapons and waded into the fanatics,
wasting them with their own bullets. For almost 18 long, blood-soaked hours,
it was often hand-to-hand fighting with knives, pistols and rifle butts.

That terrible night, the Rangers were supported by USAF AC-130 Specter
gunships that, according to an Aussie SAS commando on a nearby knob, lit up
the hills around them. "It was bloody amazing, the most beautiful - yet
fearsome - sight I'd ever seen," he said.

The entire action was relayed by Predator drone to the White House, the
Pentagon and the generals whose flawed plan got our kids into FUBAR-plus in
the first place. The spectators could watch in comfort and safety while our
courageous Rangers fought and died and another squad fell wounded. But those
who were hit never faltered, continuing to put heavy fire on the enemy in
the fierce kind of combat and freezing conditions our forces haven't seen
since the Korean War.

Marc Anderson used to tell his buddies he was leaving the 1st Platoon $5,000
to celebrate the good times if he checked out. Upon their return to Fort
Stewart, Ga., they were stunned to learn he wasn't kidding. Hopefully, it
won't be long before they'll be lifting a few to him and the other
extraordinary men they - and we - lost during one of the most heroic
small-unit fights in U.S. history.

Timothy was working on a communications tower and due to a winch/rope failure he fell to his death. He is survived by his wife Samantha, his son Noah, daugher Mackenna and unborn son Connor Timothy.

Clipping from Local Newspaper: "Two technicians working on a wireless communications tower about 50 miles east of Austin died after a fall Wednesday. Timothy Paul Deslatte, 27, of New Braunfels and Joe Edward Palafox, 22, of Waco died at 4:15 p.m. while installing equipment for Verizon Wireless near the community of Lincoln. Another man was injured. A worker lowering the men in harnesses from the tower lost control of the rope and the men fell 200 feet, the sheriff's office said." 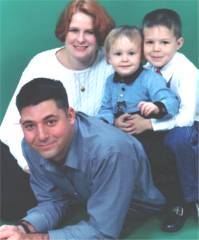 When it comes to close air support, these airmen are experts. It’s their calls that bring air power to the Army battlefield.

Like contestants on a survival-based reality television show, the airmen ensured they had everything they would need to sustain operations for at least three days. A complete inventory from “beans to bullets” was accounted for before being loaded into each configured Humvee. They were ready to deploy.

Airmen like Senior Airman Courtney Hinson, a terminal attack controller, are entrusted with an MRC-144 weapons system — a half-million dollars in communications equipment housed within a Humvee. As part of the 18th Air Support Operations Group, supporting 18th Airborne Corps, Hinson and his comrades are responsible for keeping their systems and the mission running. And testing frequencies is part of knowing the system.

“We can talk to anyone in the world from that equipment,” Hinson said. “From Pope, I’ve talked to the base operator at Thule, Greenland, using a high frequency.”

It’s those frequencies that help tactical air controllers get aircraft to the fight. The controllers coordinate airspace and call in air strikes as advisers to Army ground commanders on what air power can bring to the fight.

“We’re aligned with the Army, not attached. We’re with them every day so there’s a good rapport, and trust is built up,” said Master Sgt. Hal Sullivan, 22nd Air Support Squadron flight superintendent at Pope Air Force Base, N.C.

Both tactical air controllers and soldiers wear black berets, so sometimes it’s difficult to tell there are airmen on the battlefield. And they work with the Army so much that many of them are more familiar with Army culture than their bluesuit roots.

In fact, with 16 years of being an airman, Pope Air Force Base, N.C., was the first base he’s been stationed at — the rest have all been Army posts. It’s more the rule than an exception in this career field.

And most of the time, these controllers are the only enlisted people surrounded by officers in tactical operation center meetings. But that doesn’t seem to bother them. They’re handpicked and carefully screened for the career field, and they enjoy the empowerment of the job.

Putting on the paint is part of the process when it comes to tactical air controller training. Grilli uses a Humvee mirror to make sure his face is covered with camouflage makeup. Concealing themselves in hostile environments like Afghanistan can be as important as the calls they make.

A testament to abilities
With technical sergeants making decisions a lieutenant colonel could be making, Sullivan said it’s a testament to their abilities and the training they receive.

“These guys are squared away. I don’t have to look over their shoulders — they make their own decisions,” he said. “They’re aggressive and can make quick decisions on their feet. They are doing what they do because they want to, not because they have to.”

It’s a job that most of these men, it seems, have indirectly trained for most of their lives. As a child, Hinson enjoyed the outdoors and played GI Joe, so the front-line excitement and challenge of doing this job, in the heat of battle, was just his speed.

With recreational hobbies like camping, hunting and fishing, the rustic lifestyle of Army field training is something most of these outdoorsmen actually look forward to.

“I enjoy getting out of the office to play in the field with the Army,” said Senior Airman Charles Hathaway, a terminal attack controller.

Admittedly, day-to-day operations within the unit can be dull. But 12-mile road marches once a week and daily physical training keeps them moving and conditioned for exposure to any environment.

“If I’m in trouble, my buddy is going to do everything he can to take make sure I get back,” Hinson said. “We’ve got the best training in the world and get to do stuff that Hollywood portrays on TV.”

Practice with purpose
The need to constantly practice technical skills, in an exercise environment, gets them focused on what could happen when in the field.

“We have to be experts on aircraft capabilities and weapons effects to protect the friendlies on the ground and destroy the target,” Sullivan said.

But these guys want to be where the action is, at the leading edge of the fight. Three to five Humvees are at any given theater location to support strategic positioning and ensure backup systems are ready. Long-range surveillance teams, or scout teams, get visual identification of the target and make recommendations. It’s what they train to do.

“With air power, we can put bombs on a target any place in the world at a moment’s notice,” Sok said. “All it takes is someone on a radio calling and telling them the target location.”

And other airmen doing the same job agree. They can be as close to the target as 165 yards, so, many times, they’re watching target destruction.

Grilli (left) calls in coordinates from an MRC-144 while Brown drives the Humvee. The half-million dollar MRC-144 is housed in the back of the vehicle and is considered a weapons system

“There’s nothing like exiting an aircraft, and then, when you get on the ground, watching a 2,000-pound bomb disintegrate a target. That blast takes your breath away,” Hinson said. “You know that you’re the superior world force.”

It’s an excitement that’s shared throughout the career field with airmen like Staff Sgt. Shannon Cruz, another terminal attack controller. He never gets tired of seeing the aircraft come in and take care of business. The highlight of his career was when he was deployed to Kuwait. He controlled 80 close air support sorties in 45 days.

And with close air support a necessity in hot spots like Afghanistan, it’s reassuring to know these guys are experts and close by, even though their families wish they were home. With an average deployment rate of 120 days on temporary duty, the mission takes a toll on home life, and the pace isn’t likely to improve for some time.

“In light of the current world situation, they’re in high demand, and there aren’t enough of them to do what needs to be done,” Sullivan said.

Despite increased requirements, an unexpected outcome has emerged as a result of this war on terrorism.

“Operation Enduring Freedom brought to light the importance of special operations,” he said.

Veterans like Sok believe the events have renewed confidence in the Air Force and what tactical air control parties can contribute to the fight.

“We’re proving more and more our value and that we’re capable of doing the job,” Cruz said.