CAMP RED CLOUD — Airmen are helping the 2nd Infantry Division test the counter fire systems it has aimed at the North Korean artillery it faces across the Demilitarized Zone.

About a third of the Warrior Division’s 14,000 soldiers, and a handful of airmen, took part in the recent weeklong external evaluation.

The "eval" is something the unit does quite often, said Capt. Steven Wollman, a division spokesman. But each one is a major test of its fire support elements, he said. Those include mortars and artillery, plus division and Air Force aviation assets.

One unit taking part in the test is the 4th Squadron of the 7th Cavalry from Camp Garry Owen. It deployed 25 soldiers — and five airmen — to set up and run a tactical operations center. The site, in a dusty plowed field next to a busy highway, is not a pretty place.

A Bradley cavalry fighting vehicle welcomes visitors at the opening in the concertina wire surrounding the operations center. But it’s home for now, for the soldiers and airmen whose task it is to integrate and direct firepower and close air support.

"Our Air Force guys are technically and tactically proficient," Boswell said. "They know their business. We couldn’t accomplish our mission without them."

The field conditions are nothing new for the airmen. They "live, eat, sleep, work and sweat" with soldiers. They’re as aware of the hundreds of North Korean artillery pieces that could rain high explosives, chemical or biological shells on their camp — just a bit more than three miles from the DMZ. Those guns can reach targets in Seoul.

The airmen are part of the cavalry unit’s fire support element, said Master Sgt. Jorge Collier, who wears the division’s Indian Head patch above his chevrons. He’s the Air Force’s only enlisted battalion liaison officer on the peninsula.The airmen advise the Army commander on close air support, help plan it and then control it. To provide close air support direction, the airmen are normally the closest troops to the fight. That earns the squadron’s four airmen the respect of the soldiers they work with.

"We treat them just like any other soldier," said Private John Barrera, a Bradley driver.

Collier and his troops appreciate the acceptance. To ensure they remain an integral part of the unit, "we eat with them, smell like them — do everything with them. That’s good business."

A 17-year tank operator, Sgt. 1st Class John Wick is the squadron’s tank master gunner. He was helping provide external security at the tactical operations center’s site. For most of his career, he’s worked with the Air Force "TACPs." As a tank commander, Wick said there was nothing better than seeing A-10s streaking in to help his unit.

"These are the guys who’ve got my back if I ever have to roll out to combat," he said. The airmen, he said, are a key reason the division is ready to meet any North Korean threat. 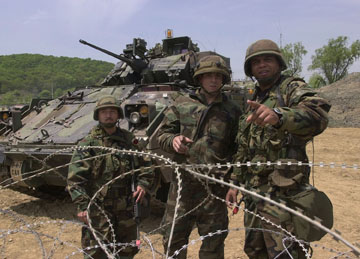