Jason was killed while performing Night CAS operations on Udairi Range in Kuwait on 12 March 01. Jason was laid to rest near Nashville TN. A Navy FA-18 dropped 2 MK-82s on the OP. The investigation results are HERE. Jason is survived by his one year old son Andrew and his wife Shannon.

Running Log from ROMAD.COM
March 12 2001 We have lost a brother. 12 March 01 at 1130 Eastern Time, while performing night CAS training in Kuwait. Jason Faley was killed. Also involved in the accident was Tim Crusing. Tim, although badly injured, is in stable condition in a Kuwaiti hospital and should recover completely. This hits pretty close to home for me as I hired and supervised Crusing at the 5th Special Forces Group TACP and put Jason through SF Pre Selection for his assignment to the Task Force 160 TACP. I'm sure alot of others out there are in the same situation.

Jason is survived by his wife Shannon and his 1 year old son Andrew. Please put Jason and Tim in your prayers.

NOTICE: Received a request from Jasons family through 19 ASOS. "Please hold off on the flowers. We appreciate your thoughtfulness but please wait for the funeral" When a date is determined for the Funeral it will be posted here on the page. There will be a memorial service on Thursday 1300 CST (15 March) at Ft Campbell. If you have any questions please send all inquiries to LtCol Bartsch, Commander 19 ASOS at DSN 635-0563. As was stated above, the funeral services have not been scheduled. Hold your flowers until then, then lets show the family how much Jason meant to us and bury the chapel.

March 15 2001 FUNERAL INFORMATION:
Viewing 20 March 01
Funeral 21 March 01, Check the Message Base for time information from Kevin Tacy
Address:
McReynolds-Nave & Larson Funeral Home
1209 Madison Street
Clarksville, TN 37040
This should be the target address for flowers. This is a challenge. If anyone can get into the chapel after its filled with flowers we have failed. That facility should look like a botanical garden.

In Memory of SSgt Jason M. Faley, a memorial fund has been established for his one year old son Andrew. Persons wishing to contribute can do so by the following:

How to contribute to the Jason A. Faley Fund (for Andrew) All Fort Campbell Federal Credit Union branches have been notified and will be ready to accept donation by mail or in person beginning Thursday, 15 Mar 2001.

I would recommend that no one speak to the press without first getting with your chain of command and PAO. Comments to the press will only generate more rumor (possibly damaging). Until the investigation is completed no one will have any details on the accident.

18 March 2001 A call for text/pictures/comments: This is a request to all that have met Jason Faley. Send pictures or things you remember about him to charlie@romad.com or (Charles Heidal, 10018 Candle Maker St, Las Vegas Nevada 89123) This information will be compiled into a book (Like a scrap book) and given to Shannon so that when Andrew is old enough he will know who his father was and what he did for his country. Think about what you would want your child to know. Its the least, we as a career field, can do for one of our fallen brothers.

5 May 2001 More updates. Still waiting on photos from the attendees. Alot of people took pictures. Getting them scanned and sent to me takes a little longer

Speakers at the Funeral

7 May 2001 Just received this in my email box. Everyone should use this as a template when you write to your congressman or senator, or in this case, the Prez:

We are writing to you today, asking for your help. At this point in time, we are appalled by the military’s stand on justice.

On March 12, 2001 our beloved son SSgt Jason M. Faley was taken from us through negligence of a Navy pilot. We realize that nothing can bring him back to us, but knowing that this man will pay for his crime would help start the healing process.

Jason loved his position in the Air Force. When he called home or came to visit it was all he talked about. He was always competing with himself to become the best ROMAD in his division, and he had medals to prove his commitment to the service and to our country. He had just completed his HALO school and Pathfinders, and was looking forward to his next assignment, which would have brought his wife, one year old son, and him closer to his family. All this has been taken from us, along with watching him grow with his family and teaching his young son how to fish, play ball, swim and all the other wonderful things that fathers do.

Now that we have read the investigation report it makes us feel that he lost his life in vain. If you or I were to run a stop sign, by mistake, and slam in to a school bus, killing six children and injuring eleven more, would we not be held accountable for our actions? Would the DMV just put a letter in our file and allow us to keep on driving? Would the parents of these children let us go unpunished for this crime? All we are asking is that this man be held accountable and that justice be served.

As Commander and Chief of our Armed Forces, is there nothing you can do? Would you sit back and take the findings and try to continue if it were your child? Personally, we will continue to contact everyone that will listen with hopes that proper training and proper punishment be the same for our military as it is for civilians.

14 May 2001 Received the following email:
Charlie

I just got this tattoo put on my upper arm (#1)in remembrance of J. Also got a call from the American Legion Headquarters back home, Who ask permission if they could put a float in the memorial day parade (local) in remembrance of J. My wife Sue has been contacting/writing everybody and anybody in regards to the pilots outcome. Congressmen. Senators, TV, and Newspapers. Ross Perot called the house twice on Saturday getting some facts. Jason's wife Shannon is coming here with the baby Friday. We are all going home to visit PA. to show off are grandson Andrew. The local news wants to interview us about the accident. Shannon said the same things are about to take place to her in Tenn. I think the writing is having an effect.
Talk at ya later 17 May 2001 Received photos from SRA Murphy in Kuwait 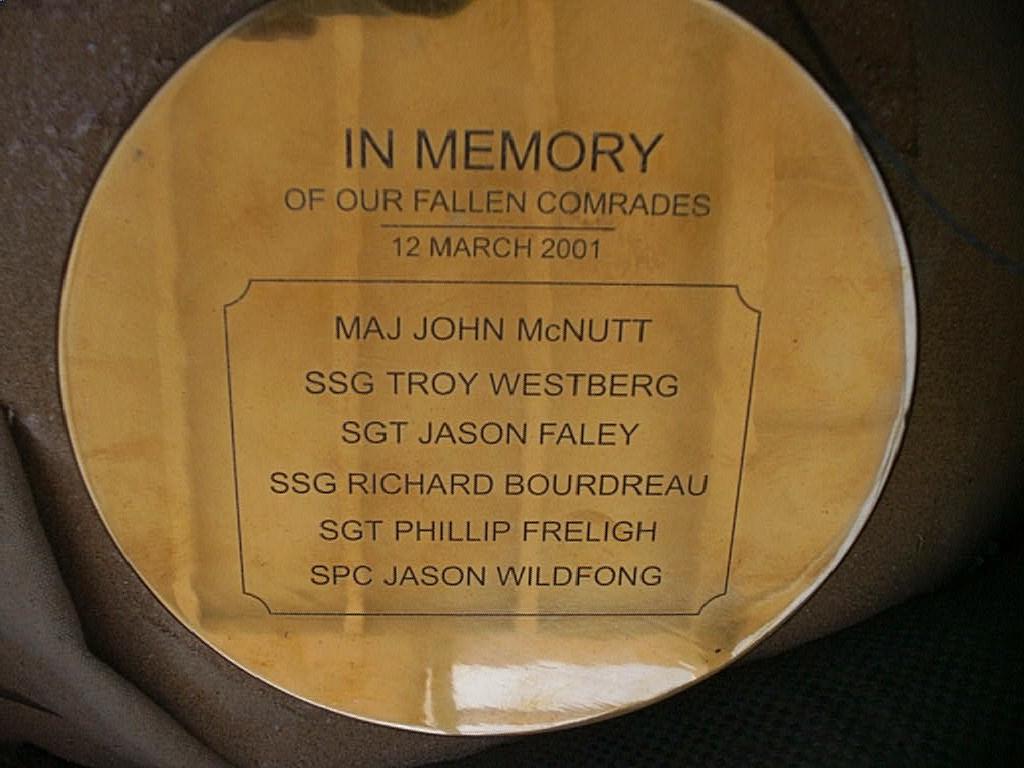 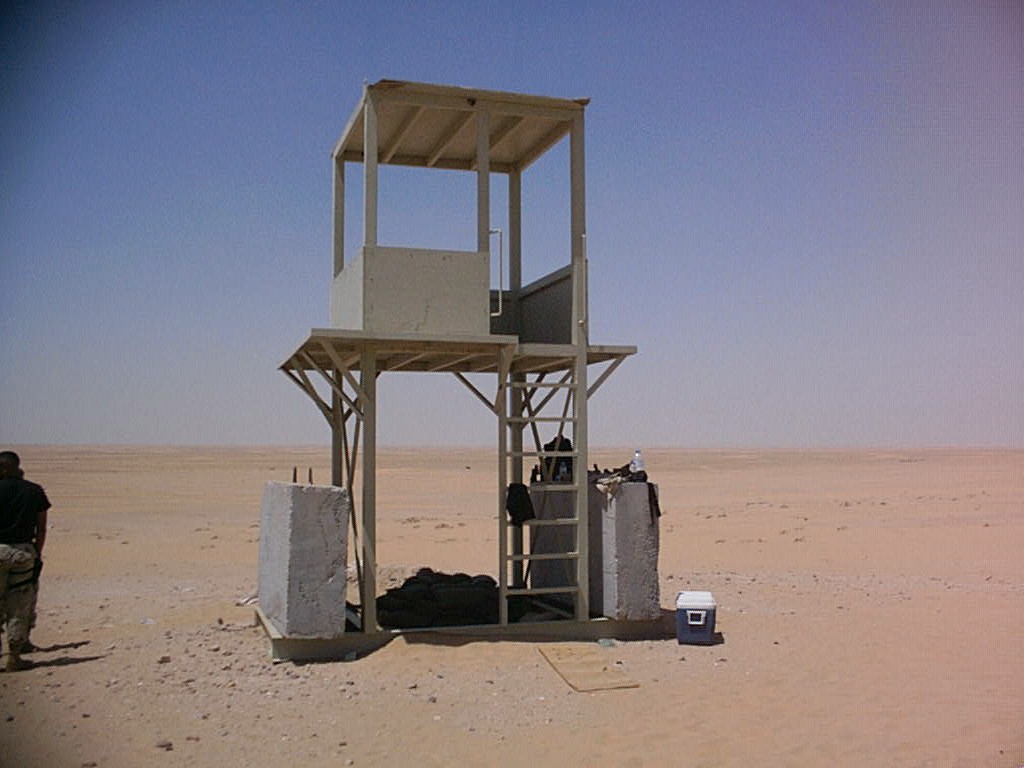 And here in the United States 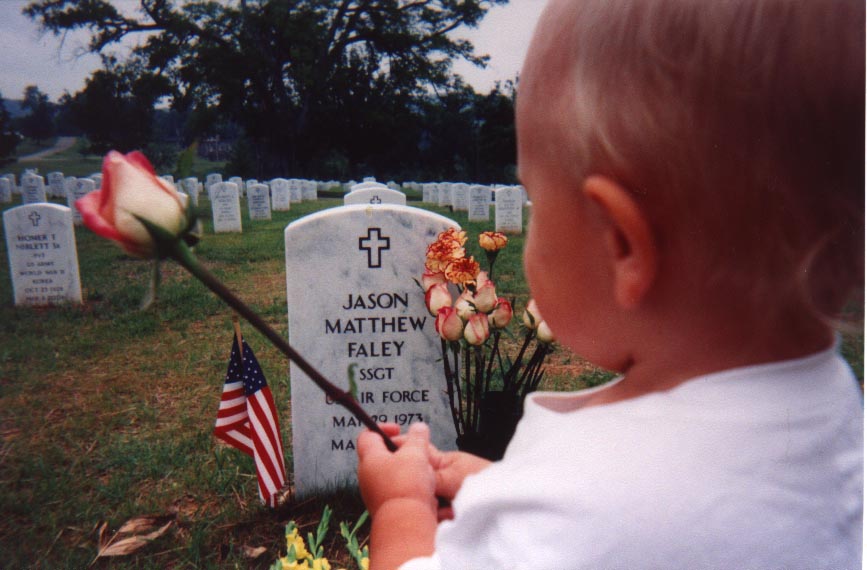 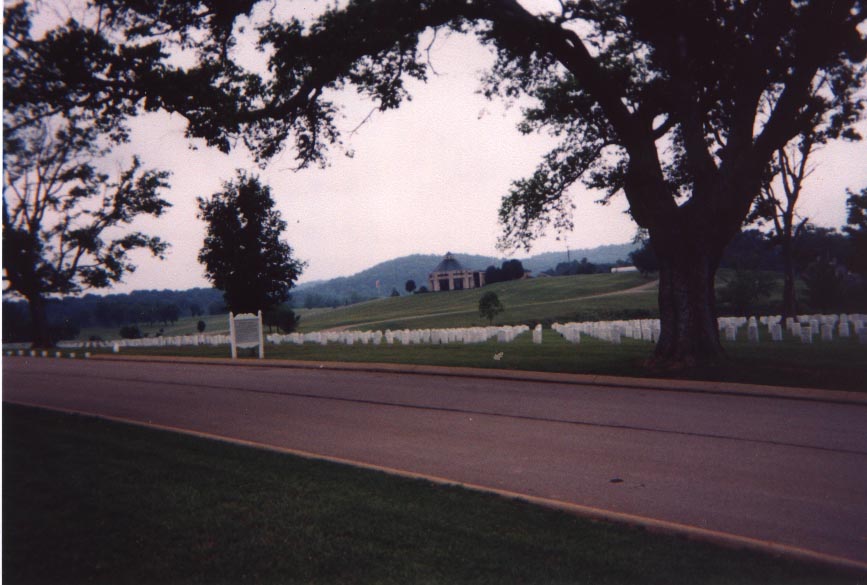 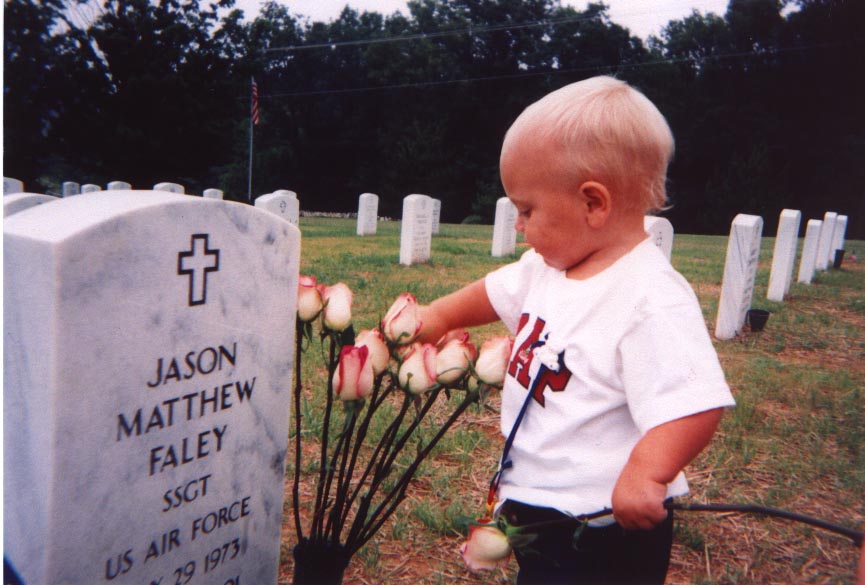