LANGLEY AIR FORCE BASE, Va. (AFPN) -- An Army tank unit runs into heavy resistance from an enemy force. Immediately, a small Air Force unit, called a Tactical Air Control Party, working side by side with the Army's lead elements, sees the danger of the situation and makes radio contact with some nearby A-10 close air support aircraft. They are vectored in and the problem goes up in smoke.

"It is necessary to improve our tactical information exchange capabilities in the joint and multinational arena to make decisions faster and apply aerospace power more effectively and efficiently," said Master Sgt. Todd Armstrong, AC2ISRC's chief of TACP Requirements. "This also permits a much closer integration of aerospace forces and ground units."

These components will provide the TACPs access to real-time information, allowing for more informed decision-making and reducing the risks for U.S. troops, said Armstrong. They will also increase night and adverse weather capabilities, a shortfall that was demonstrated during Operation Allied Force.

This equipment is being designed with the Air Force's expeditionary mission in mind and will reduce the weight for teams operating on foot, said Armstrong.

"This program is closely synchronized as part of a joint effort," he added. "We intend to buy several components already in use by other services and the special operations forces community. The Marines have expressed a strong interest in adopting portions of our program."

The AC2ISRC, headquartered at Langley, is the Air Force's lead organization to integrate and influence command and control and intelligence, surveillance and reconnaissance. The center originally stood up as the Aerospace Command and Control Agency in 1997, but changed its name to the AC2ISRC in January with the addition of the intelligence, surveillance, and reconnaissance mission.

By J.S. Newton
Staff writer
HOFFMAN -- Their career field is little known outside the military. But they work with U.S. Army Rangers, Special Forces soldiers and secretive aviation units in some of the meanest areas on earth. They are the Air Force’s own Tactical Air Control Party -- or TACPs. It’s pronounced Tac-Pee. 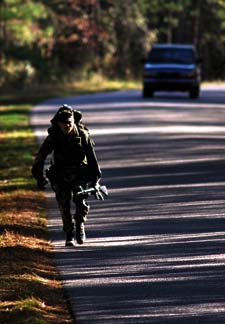 Staff photo by Jay Capers Senior Airman Kevin LaBudde is the first to finish the ruck march during tryouts at Camp Mackall. The Special Operation TACPs have to finish a 12.4-mile ruck march in four hours or less

From dangerous missions in Kosovo to shootouts in Somalia to the U.S.-led invasions of Panama and Grenada, TACPs were there to help keep some of America’s toughest soldiers from getting shot up.

Their job is so specialized that on a recent worldwide tryout, only seven members showed up to attempt the course at Camp Mackall.

‘‘Where in the civilian sector do they let you jump out of airplanes and blow stuff up?’’ said Senior Airman Anthony Brent.

The men in this job have a simple goal.

The job of TACPs becomes all the more important in special operations units such as Rangers and Special Forces teams.

Often, these units are small and require help in isolated hot spots -- often behind enemy lines. The only way out, officials say, is with fire support.

The TACPs guide bombs to enemy targets. Sometimes those targets are only meters away from their position.

The fire support might include calling in mortar fire. Or it might require calling in an AC-130 gunship to clear a path for troops. Whatever the weapon being employed, the TACPs must coordinate it.

The members of these Special Operations units must be able to keep up with the pace, or operational tempo, of the units themselves. That requires the TACPs to be in top physical condition.

The Special Operations TACP members go through a weeklong course designed to test their mental and physical abilities.

TACPs are also required to be able to swim 50 meters in a pool with all of their battle dress uniforms on as well as their combat boots. It is a test designed to gauge a man’s fear of the water more than his ability to swim.

The Special Operation TACPs also have to finish a 12.4-mile ruck march in four hours.

Not only does the job require physical fitness, but it also requires a regimented mental toughness.

Before he joined the military, Brent was a firefighter and emergency medical technician.

Brent is a 28-year-old airman from Fort Irwin, Calif.

To get in shape for his tryout, he went through a vigorous workout schedule, which included a 3,000-meter swim every other day.

On off days, five-mile runs are common. ‘‘And probably a two- mile sprint,’’ he said.

Senior Airman Michael Griffith, who is 26, said he likes the job because of the adventure.

Working with Army Rangers offers him an opportunity to be near serious training, where rounds are live and the action is as real as physically possible.

When Griffith joined the military straight out of high school, his father, a recruiter, signed him up.

‘‘I figured I’d join and help him meet his quota,’’ he said.

He described himself as a quiet guy, married, who doesn’t go out much and doesn’t drink.

He said whatever the personality other Special Operations TACPs may have, they all have one common interest.

‘‘It’s to be like these guys,’’ he said, motioning to a veteran Special Operations TACP standing in the room, ‘‘so that I can have some stories to tell.’’