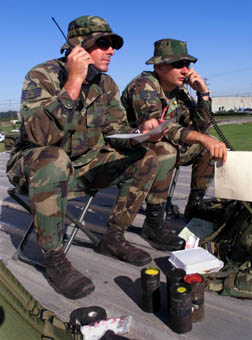 Neither had much effect, except to add to the already-strained relations in the region said Gildow, who recently returned to Alaska after a four-month rotation to Tuzla.

"There were concrete barriers near the front gate leading into the base," he said, explaining the barriers kept would-be terrorists too far away from the base to do any real damage.

But the attacks also explained why people at the base stayed pretty well hunkered down, leaving only to go on patrol or to conduct official business in Tuzla, a city about 8 miles to the north of the base.

Gildow was one of two 3rd ASOS controllers serving with the Army's 1st Cavalry Division at Eagle Base. He arrived in Bosnia in early April, while Staff Sgt. Chris Mann, another controller from Fort Wainwright, arrived about a month later.

The 1st Cavalry served as the U.S. component of the United Nations peacekeeping contingent in Bosnia during Gildow's rotation. He said the task rotates among various Army divisions every six months.

U.S. forces there wore standard battle dress uniforms with an American flag patch on the right shoulder. All the vehicles were marked "SFOR" -- for Stabilization Forces -- in white capital letters.

As an enlisted terminal air controller, Gildow didn't go on many patrols with the 1st Cavalry. His job was more an "if something happens, we're here" type of job, he said.

"AWACS (Airborne Warning and Control System) were flying over the area," he explained. "If they picked up something inbound (an aircraft or missile), we could give the 1st Cavalry an early warning capability."

He admitted that with the small area they were dealing with, it wasn't much warning, but added that the 1st Cavalry had its own early warning systems as well.

"An ETAC's primary job is to advise the Army on aircraft capability -- how to use close-air support in its battle plans," he said. "Then, when we're out in the field, we control the mission. We tell the pilots, 'Here are your friendlies. Here's us. Here are your bad guys.' Then we talk them in. We describe it according to the features of the area. We talk his eyes on to where they need to be."

Gildow went on some patrols to familiarize himself with the terrain around potential target areas, in case a shooting war ever ensued.

The 1st Cavalry patrolled their areas 24 hours a day. Dressed in full body armor, the people on patrol went out in a convoy of several vehicles, most carrying heavy weaponry -- everything from 50-caliber machine guns to grenade launchers. Gildrow said he never heard of any of the patrols being fired upon.

"It would have been suicide (for them if they had fired at the patrol)," he said.

He described the Bosnian people as "great."

"They were very appreciative of what we were doing for them," he said. (Courtesy of Pacific Air Forces News Service)