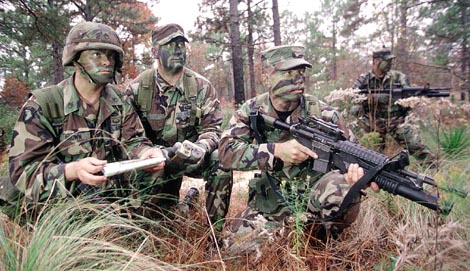 They are like the harbingers of a sudden thunderstorm. Sporadic drops that fall unnoticed before the storm unleashes its fury. Signs that sometime soon, the skies will open and the deluge will begin. When the 14th Air Support Operations Squadron brings on that storm, it rains fire and steel. Based at Pope Air Force Base, N.C., the unit is the 82nd Airborne Division’s hotline to the Air Force. When the Army’s elite 82nd needs close air support, 14th ASOS tactical air control parties call in the air strike.
Air Force tactical air controllers, or TACPs ("tack-peas"), are attached to Army units around the world. But a few of the controllers (about 20 percent) are airborne troops who go on the job via parachute, and most of those (jumpers) are at Pope. That’s because the 82nd Airborne’s mission makes the 14th ASOS different from most of its fellow units. The 82nd Airborne Division is the Army’s ‘911’ force. They are who the Army calls upon in an emergency, said Col. Eric Rosborg, commander of the 14th ASOS’s parent unit, the 18th Air Support Operations Group. "The 82nd Airborne cannot be successful without air power. The 14th ASOS gives it to them." The unit takes it to a battlefield they share with the Army, sometimes in close proximity to the enemy. They go loaded with the weapons and gear necessary to hide and survive, as well as the high-tech gadgetry and radios they use to call the rain of fire. Since we’re airborne, the forward guys carry all that equipment on their backs, said Staff Sgt. John Saulsbery, a 14th controller.

They carry it anywhere the Army sends its 911 force. And if the 82nd deploys, the 14th goes with them. Because of the 82nd’s mission, we have a little more emphasis on mobility and being ready to go right now, said Lt. Col. Bruce Gebhard, the 14th ASOS commander. When Gebhard says "right now," he means it. The squadron’s three flights, each attached to an 82nd brigade, rotate on alert status. When they’re on alert, the entire flight carries pagers and is subject to two-hour recall. If called to battle, they have 18 hours from notification to be in the air, flying to the next world hot spot.
With TACPs calling the shots, the Air Force makes that spot too hot for an enemy. But their skills aren’t limited to calling a firestorm of air power. With precise timing and complex guidance, they also coordinate Army artillery, and some are even trained to call in artillery fire from Navy ship
Marshalling such firepower to rain over their own heads is a complicated chess match, but TACPs are grandmasters. "In combat, not only are you responsible for destroying the target, you’re responsible for not bombing Army personnel and for the pilot’s safety in conducting the mission," explained Senior Master Sgt. Mark Villella, the squadron’s superintendent. 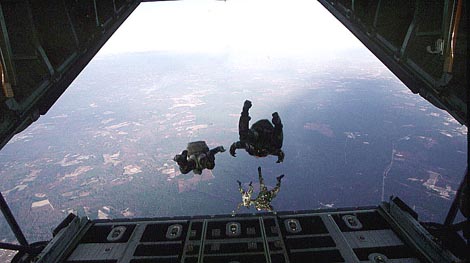 Tactical air controllers call on artillery to shell a target to get the enemy to duck down so they don’t see our aircraft coming in, Saulsbery said. Almost instantly after the shelling ceases, Air Force jets will strike, and as they exit the area, the artillery will come to bear again, keeping the enemy pinned so they cannot fire at the departing aircraft. Their guidance is so precise that TACPs can even direct attacking aircraft to fly under incoming artillery shells. It takes detailed planning in a three-dimensional area, Saulsbery said. We have our naval artillery, Army artillery and close air support, all at the same time. We don’t keep a pilot boxed up. But we don’t want to stop one organization from firing. We want to combine the effects on that target and give the enemy multiple explosions. Saulsbery is intense he’s all military. When he explains his job, he stands at rigid parade rest and his speech is peppered with sirs and acronyms. But when talk turns to Villella, the squadron’s senior enlisted troop, his poise and tongue falter. Saulsbery’s eyes glisten with admiration. You look at the man. ... He’s been with the Rangers. He has a Bronze Star. He’s jumped into combat. ... There’s nothing I can say that will come close to what I’m feeling. That’s who I want to be. That’s who I want to follow. On his second tour with the squadron in his 16-year career, Villella is a bit of a legend even in the TACP community, where veterans of real-world operations abound. His training includes the Army’s air assault and Ranger schools, and he was with the 75th Ranger Regiment in 1989 when the United States ousted Manuel Noriega from Panama. He jumped into combat with the Rangers, and earned his Bronze Star when he braved enemy fire to help rescue wounded Rangers pinned down in a Noriega headquarters building. 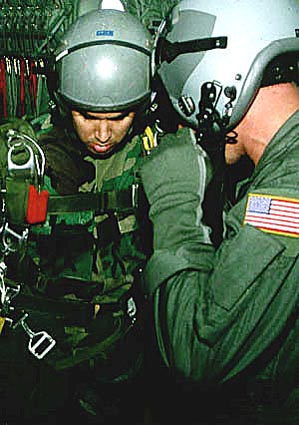 A few more like him, and we could rule the world, Gebhard said. He’s as good as they come. But aside from the yellow star on his jump wings that marks his combat jump, Villella is completely unassuming. He has participated in real-world operations in Grenada, Honduras, Haiti and Panama, but doesn’t look the part of a combat-seasoned senior NCO. Chop a few stripes off his sleeve, and Vallela’s boyish looks could let him pass for one of the young airmen who holds him in such esteem. When asked to discuss his accomplishments, he fidgets. Words come with shy hesitance. I’m not much of a talker, he shrugs. But he is a leader in this gung-ho community. Villella regularly leads the squadron’s emergency deployment readiness exercises, as well as its daily physical training sessions. He’s known for his unusual and almost diabolical methods -like four-person push-ups that leave his co-workers groaning and exhausted. He comes up with something different it seems like every time, Gebhard said. And it’s almost always something unusual. But even through their groans, the squadron’s troops maintain warrior attitudes. They see it as part of the job. Our mission is to infiltrate with airborne infantry, so we have to be more physical than armored cavalry or those units that ride around, said Staff Sgt. Pete Klein. Adds Airman 1st Class Cole Doupe, "It’s much more physical than the regular Air Force, but I like to test myself." Doupe gets to test himself regularly. Just 21, he’s been with the squadron less than a year, but is already a veteran of more than 40 jumps. Frequently those jumps are the start to one of the squadron’s readiness exercises. The 14th plays "war" as much as their Army cohorts, and their exercises are often grueling overnighters that start with wee-hour recalls followed by jumps into drop zones at nearby Fort Bragg. Villella, who participates in them in addition to running them, says they’re a tool to check the TACPs’ combat capability. They frequently include miles of wilderness marches and battlefield operations in all kinds of weather. And Sergeant Villella will be down there, low-crawling through the mud with the rest of us, Saulsbery said. "I try to lead from the front," Villella explained. "I won’t make my people do something that I would not do. It doesn’t bother me to get dirty and sweaty. The phrase ‘misery loves company’ gets better if I’m sweating with them. The 35-year-old Villella has been a TACP his entire career. He’s seen the field evolve from the days when enlisted troops were essentially radio men for officers who controlled the aircraft. Today, young airmen call the shots, using gear like laser target illuminators, night-vision equipment, and an array of communication and navigation systems. As an airman today, you control multi-million dollar aircraft during close air support missions, Villella said. Giving the pilot the best information and trying to suppress the threats enhances his chances of survival, as well as the Army’s. And suppressing the threat comes via a storm of fire and steel on the enemy.

Senior Airman Monica Caulder is not your typical information manager. Sure, she pushes her share of paperwork. But nobody has to push her out of an airplane. Caulder is one of the few jump-qualified information managers in the Air Force, and the first woman to jump with the 14th Air Support Operations Squadron. She volunteered for the special-duty job while on her first assignment at Keesler Air Force Base, Miss., "just to put a little adventure in my job," she explained. "Information management people sit behind desks, so there’s not many opportunities to jump. I didn’t even know we could until I heard about the assignment." She arrived at Pope in September 1997, and is just the second female assigned to the squadron in its 55-year history. At 5 feet two inches and 110 pounds, Caulder looks buried in her jump gear. But she says she receives no special treatment from her all-male squadron of gung-ho tactical air controllers. "They cut me no slack," she says emphatically. They don’t, perhaps, because she trains as hard as they do. The 24-year-old gets in the mud with the TACPs, doing their daily physical training and participating in their numerous exercises. "It’s not easy doing four-man push-ups," she said, describing one of the more bizarre PT events. "But I stick with it and try to keep with them. I can’t always do it, but I try. She tries, inspired by her squadronmates. Caulder said morale in the 14th is the highest of any unit she’s seen. "Everybody here works to support each other," she said. They supported her even before her first jump. "The first time they took me up on a plane to show me how things were going to go, they strapped me in near everybody lined up at the door," she said. "Then they opened the door, I looked out, and my mouth dropped. I was like, ‘No way!’ " But now she’s not scared when she jumps " no way It’s such a rush. The adrenaline is so that when you go up there, you don’t even think about it," she said. "You go out the door and you’re gone." With six years in the Air Force, she readily describes herself as "ate up" and plans to make the service a career. Still, she has no desire to be the first female TACP. "No," she says. "The guys can definitely have it." 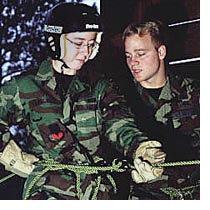