They seem to be suspended in time — throwbacks to the ’40s when the Air Force was still the Army Air Corps. They don’t quite fit in at an Air Force base, but they’re outsiders at an Army post, as well.

While some people may have trouble figuring out whether these troops are soldiers or airmen, one thing is clear: Enlisted terminal attack controllers in South Korea don’t sweat their identity crisis. They’re too focused on realizing a trait they’ve held onto since boyhood.

“Most boys like seeing things explode. We just haven’t lost that,” enlisted terminal attack controller Tech. Sgt. Jay Deyoe said with an ornery grin. Like other airmen of his trade, Deyoe serves as a lynch pin between soldiers facing the enemy on the battlefield and Air Force pilots attempting to put steel on the bad guys. Although they are bluesuiters, he and his comrades live, eat and work with the Army.

“We go into the battlefield with the Army and direct [bombs] from air to mud,” Deyoe said.

Hidden on the ground, usually within a mile to a mile-and-a-half of the enemy, the Deyoes of the world serve as extensions of the eyes and ears for pilots providing close air support to Army troops. They direct an arsenal of weapons on enemy targets, such as tanks, to improve the soldiers’ battlefield position and chances of survival. They also ensure they direct assaults away from “friendlies.”

“We want to keep fratricide to zero,” Deyoe stressed.

Deyoe is stationed at Camp Humphreys, one of three Army installations in South Korea that houses detachments with Air Force controllers. The other two installations are Camp Casey and Camp Stanley. The Air Force detachments assigned there belong to the 604th Air Support Operations Squadron, a geographically separated unit from Osan Air Base that operates out of another Army compound — Camp Red Cloud, 25 miles northeast of Seoul.

The blue-suiters are the end game. They use their knowledge of munitions and a front row view of the battle to direct firepower. They travel with the Army, wear an Army patch and ride in humvees featuring a quarter-million dollars worth of radio equipment. When they are too close to the enemy to use humvees, they pack gear in rucksacks and hike the rest of the way.

“We do a lot of training with the Army, because when something bad happens — like Desert Storm — we have to be ready to go,” Deyoe said.

The controllers have already been proven in battle. One of Deyoe’s partners at Camp Humphreys (Tech. Sgt. Brian Reed) served in Desert Storm with the 101st Airborne Division (air assault) from Fort Campbell, Ky. Reed earned a Bronze Star and a Purple Heart, after suffering a leg wound from artillery shrapnel.

Deyoe says the toughest part about his job is being away from his family, because of frequent deployments. But a close second, in his opinion, is living with the Army.

“I’ve been on more Army posts than Air Force bases in my career,” Deyoe said. “Sometimes I get a little jealous because I see how the Air Force lives.”

But he says experience has made him put things into perspective.

“When I deploy and live in a tent city, I see three different worlds,” Deyoe explained. “I see the Air Force in climate-controlled tents watching a movie, eating popcorn. Then, even though I’m in the Air Force, I have to go live with the Army, which stays in tents without any of the perks. So naturally, I’m complaining. Then one morning, I roll out of bed and step out of the tent to see Army Rangers who had just come in from the field. They were rolled up in ponchos, sleeping on the ground outside our tents, and they were covered with snow. Something like that makes you appreciate your own situation a little more.”

For Senior Airman Harvey Wagenmaker and Airman 1st Class Ryan Stannard, who are both in their early 20s and are tactical air command and control specialists, the austere conditions soldiers face are right up their alley.

“I knew right away I wanted to do something like this,” Wagenmaker said. “I wanted to be in the Air Force but do Army things — jump school, air assault school. But you have to prove yourself to the Army because they don’t accept you right away with those blue stripes.”

That’s one of the reasons the controllers spend a lot of time in the weight room and sweat through the Army’s physical fitness training — running, pushups and sit-ups — every day for almost two hours.

“Going through Army schools, there’s only one or two Air Force members,” Wagenmaker said. “You don’t want to be the one who falls out of a run, so we work harder and even tend to win races.”

But most controllers simply enjoy being physical, which is how they chose their career. They also welcome going out in the field, pitching a tent, eating field rations and “brushing our teeth with bark,” Wagenmaker said, laughing.

Senior Airman Harvey Wagenmaker practices what he does best, calling in Air Force firepower for the Army. He wears an Army patch, travels with the Army, and, if necessary, packs gear in a rucksack and heads to the front lines.

“I didn’t want to sit behind a desk,” Stannard said. “A week behind a desk, and I’m ready to smash my finger with a hammer. We get paid to go camping. … 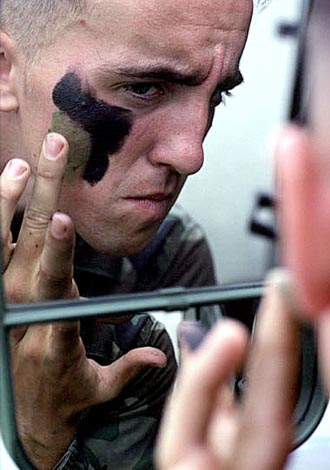 Airman 1st Class Ryan Stannard “cammies” up using the rearview mirror of his humvee. Stannard likes his job because of the unique mission and lifestyle controllers lead.

Deyoe, Wagenmaker and Stannard review tactical maps of the South Korea peninsula. If hostilities ever break out in Korea, these and other controllers on the peninsula will be minutes from the front lines.

It's designed to cross check the Tactical Air Control Party career field with the newest equipment under adverse and physically demanding conditions. Competitors arriving at Hurlburt have won throughout the year at squadron and group level mini-competitions to earn the right to compete in the challenge.

"The competition helps us validate our career field and make sure everything works as advertised," said Tech. Sgt. Eric Kibby, Det. 1, 334th TRS and one of this years' challenge coordinators. "We also recorded all the results this year will and send them to individual units so they can find out where their strengths and weaknesses are, and tweak their programs accordingly."

The TACP's in their basic form consist of air liaison officers and the TACC specialists, who are responsible for integrating air power into the fire support and maneuver plans of supported ground commanders. They're aligned and permanently stationed with the U.S. Army and usually spend their entire careers on Army installations.

"We're the liaison between the Air Force and the Army, helping to coordinate such things as air reconnaissance and aerial re-supply," said Kibby. "Our primary mission is close-air support, where we call in air strikes for the Army units we're with."

"We tried to make each scenario as realistic and adverse as possible," said Kibby. "We did a lot of the navigation course and target identification work in the swamps. To make matters worse, each member of the team carried 60-pound packs full of supplies and communications gear."

The competitors began the challenge at Duke Field and walked to the Army Ranger Camp on the Eglin Reservation where they continued with different elements of the challenge, said Kibby.

"We had some very tired airmen on our hands this year, but all of them said at the end this was the best Lightning Challenge ever," said Kibby. "Getting that type of positive feedback is important to us because we work all year to set good quality tests for this competition and it's good to know our people appreciate the effort." 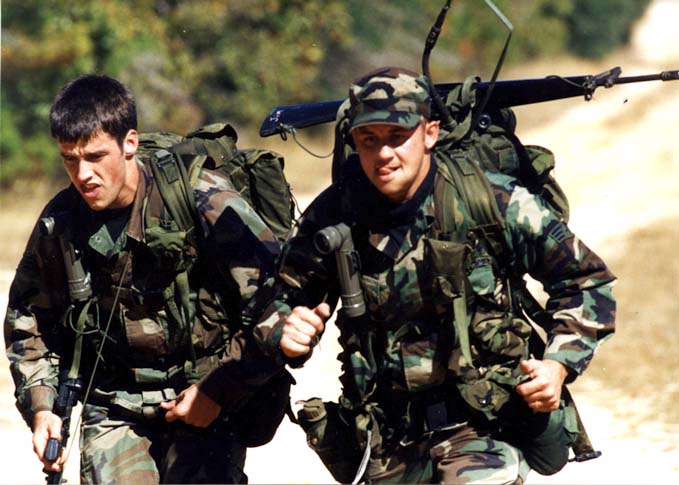