“This story is dedicated to those brave airmen who have given their lives in defense of freedom so that we, the living, may pursue our lives according to the Constitution of the United States of America. We will never forget you and your bravery. The individuals named on this special order were ROMADS assigned to the Tiger ROK(Republic of Korea) Division, Binh Dinh Provence,South Viet Nam, Dec 1967-1968 and beyond and before. Here is the list of Pack Rats/ROMADS I told you about. My name is last on the list. A little history, everyone on this list was pulling ROMAD duties of some description. Bans, Brass, Humphrey,McNichol(Piliton, and White, not on list)were assigned to the 1st CAV Regiment, at Thunderbolt airfield, Phu Phong, VN. about 20 miles SW of Phu Cat AB on Hwy QL 19, the road to Pleiku from Qui Nhon. All six of us pulled field duty as a ROMAD/Foward Air Controller. FACs became extremely scarce during this time period, however requirements for air support continued at an ever increasing rate, the ROMADS had to take up the slack. Which, they did, and did well. At any given time there were only three ROMADS assigned to this Regiment. We were further assigned to a particular brigade, one man per.We had a rotating FAC/ALO who would train us, and see to it that we didn’t stray too far off course. We did all kinds of air support including but not limited to: CAS, Artillary Fire Support, Naval Gun Fire Support, Night time CAS, Spectre Gun Ship control, Puff the Magic Dragon Missions, Spooky Mission, Moon Glow( flare ships) Dust off Medivac We also performed Air Assualt missions. And of course we had our routine chicken shit stuff. And oh yes, we were allowed to fly the mighty O1-E Bird Dog. It was “Shit Hot”, especially if you have never had the oportunity to do so. Depending on the FAC, the backseat ride was about as wild as it gets. Our living conditions, especially while in the field were as austere as it can get. I imagine like in Afghanistan and IRAQ, so take heart young airman, a lot of brave men have gone before you under similar circumstances. You will serve your country well and we will be proud of you. Okay, Frank Siebold was our First Sergeant,Post was the Div NCOIC, Bans,Humphrey, NCOIC Cav Reg, Cooper,Haynes, Addleman, Collins, Carroll and possibly Burns were ROMADS at Div. The rest on this list were probably assigned to the Tiger ROK Regiment that defended Phu Cat AB or assigned to the Regiment at Thuy Hoa AB. May God Bless you all. 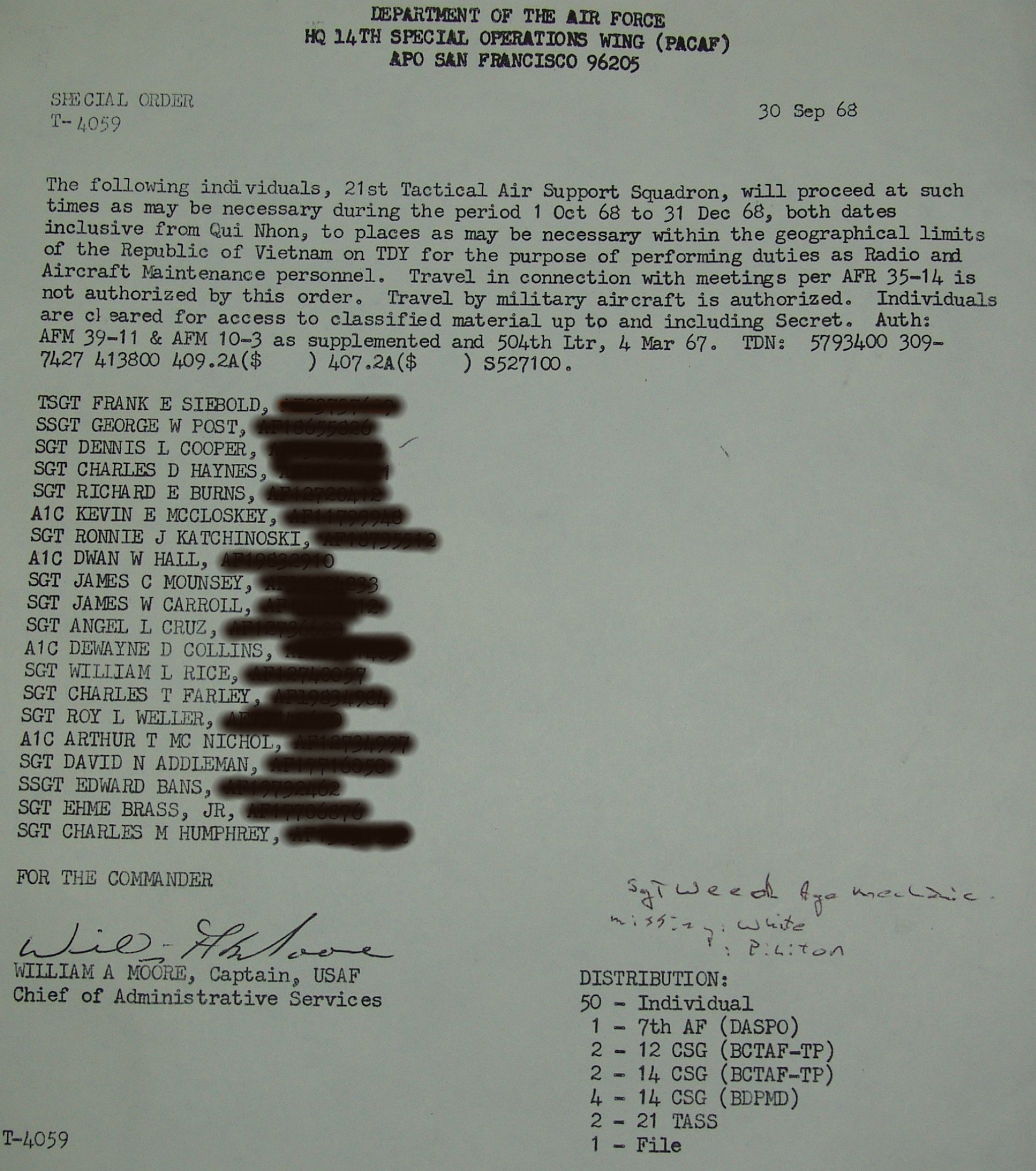